Carcassonne – A visit to the medieval walled Le Cité is a must whilst in the region. Set off early in summer as it gets very busy.  Park at the top of the hill and once you have visited Le Cité walk down across the river Aude to get a good view of the ramparts and have a stroll through the “lower” town. (NB If you are driving along the A61 at any stage stop off at the “Aire” to get a fabulous view of Le Cité) www.tourism-carcassonne.co.uk

Canal du Midi - You can take a trip on the Canal du Midi, a World Heritage Site, from either Le Somail or Homps. Both trips are good but on balance we favour the trip from Homps as there are refreshments and toilets available on the boat. If you want to hire a small boat by the hour this can be done in Le Somail too.

Take a drive along the edge of the Etangs between Bages and Peyriac de Mer - Lovely scenery and if you are lucky you will see flamingos. Stop off in Bages and be sure to find the view point where you can see how the cathedral dominates the Narbonne skyline. Also have a walk around the pretty village of Peyriac de Mer.

Collioure - Quite a long drive (not far from the Spanish border) and you need to set off early in summer to be able to park but the pretty seaside town of Collioure is well worth a visit. In the early 20th century Collioure became a centre of artistic activity with Picasso and Matisse, amongst others, making it their meeting place. Collioure has been described as the St Tropez of the Languedoc but without the ‘flim flam, froth and laughable prices’!

Le Somail – Visit Le Somail early on during your stay and visit the tourist office where you can also see a film about the history and creation of the canal. Be sure also to visit the bookshop (La Libraire Ancienne du Somail) which is in the most amazing building and which featured in the Channel 4 Timothy West and Prunella Scales’ canal journeys through France.  Sit and enjoy a coffee watching the boats going under one of the most photographed bridges in France.

Markets – Many towns in the area have markets – some fairly small and others much larger and livelier.  Our favourites are Pezenas on a Saturday morning (see below) and St Chinian on a Sunday morning. Other local markets include Lezignan Corbieres on a Wednesday morning and Olonzac on a Tuesday morning.  Les Halles (the inside market) in Narbonne is open every morning and there is an outside market on Tuesday, Thursday and Saturday.

Minerve – This ancient Cathar village is only about 25 minutes drive away and is steeped in history and offers spectacular views across the gorges cut by the rivers Cesse and Brian. A few artisan shops and quite a few places to sample and buy the famous wines from the Minervois.

Beach - The nearest beaches are at Narbonne Plage or Gruissan Plage. We prefer Gruissan which is fascinating with the houses built on stilts that featured in the film ‘Betty Blue’. The restaurants  are pretty pricey there so take a picnic and remember to take some toilet paper for the public loos!

Pezenas - A really pretty town with some quaint cobbled streets and really attractive shops. Saturday is market day and well worth a visit but you need to get there really early in order to park as it’s very popular!

Wine Domaines - No trip to France would be complete without a visit to one of the wine domaines. If you just want to pick up a large container of cheap local wine then visit the Ginestas wine cave on the road towards Mirepeisset. We particularly like their Rose. For more grandiose surroundings try the wine domaine at Ventenac. If you want the “true” experience though go to somewhere like Domaine de L’Herbe Sainte at Mirepeisset or Domaine Sainte Marie Des Crozes in Douzens where you will hear all about the wines they produce and enjoy a ‘degustation’ (wine tasting).

Narbonne - The ancient Roman city of Narbonne is approximately 30 minutes drive away. On your visit take in the cathedral, the Canal de la Robine, Les Halles (indoor city market) and the Archbishop’s Palace.

Abbaye de Fontfroide – Fabulous 12th century abbey not far from Narbonne.  Fascinating history and beautiful, serene building.  We highly recommend that you take the multi media tour – you’ll be offered a Samsung tablet and audio headset (included in the ticket price but you will need to leave a driving licence or similar as security) which guides you around the abbey and the grounds.  There is a separate child friendly version too.  There is an excellent coffee shop and restaurant at the abbey where they offer snacks,  a menu du jour and an a la carte menu. More details here

Canal Walk – Take a walk along the canal. Our favourite route takes us up to the post office in Ginestas and then along Les Gardes. Fork right and you will eventually come to the canal. Turn left along the canal. Note the boat that a farmer has “parked” in his field to avoid paying mooring charges. Eventually you will come to Le Somail (time for coffee?) and then head back to Ginestas via the canal or on the road.  If you want to extend your walk carry on along the canal over the viaduct up to Port Robine where you can cross over to the other side of the canal on the road bridge before heading back.

Terra Vinea - Situated in Portel-des-Corbieres this is a great place to visit on a day when it’s either raining or you’d like to get out of the sun for a while!  In essence a little train takes you to an underground museum about the history of wine making in the region built in an old gypsum mine. There is a light show after your descent into the mine and then you are taken on a tour around the museum.  If there is no English guide on duty then ask for the pre-recorded audio set in English.  At the end of the tour you are invited to sample some of the wines that are stored in the mine.

The Pool and BBQ at Mimarmel – Have a lazy day by the pool. Enjoy the garden at Mimarmel and fire up the BBQ!

L’Oulibo Olive Factory – Visit the olive factory just a few minutes drive away on the road into Bize Minervois. Take a tour around and taste the different types of olives and olive oil. There is also a lovely gift shop there if you need any “local” presents to take home.

Hire bikes – Hire bikes from Mellow Velos in Paraza and do your own ‘Tour de France’!  Everything you need is provided and a variety of bikes are available.  Pre-book your bikes at http://mellowvelos.com/hire/en/bike-hire-paraza/

The Ecluses de Fonseranes (the 9 locks) – A flight of staircase locks on the Canal du Midi near Beziers which allow boats to be raised a height of 21.5m (71ft) within a distance of 300m (980ft).  Fascinating to watch the boats going through.  Visitor Centre with immersive cinema (payable) plus picnic areas and also a cafe and restaurant.  www.beziers-in-mediterranee.com/en/9locksoffonseranes

Millau Viaduct – Unless you are really keen on architecture we wouldn’t suggest this as a day out (it’s about one hour 40 minutes drive) but if you are travelling by car then do factor in a stop at the Millau viaduct on your journey to or from Mimarmel. The service station just north of the viaduct affords incredible views. It also houses an exhibition and there is a film showing there that explains just how the viaduct was built. Fascinating! Penny and Robert at the Millau Viaduct Prawns on the BBQ at Mimarmel 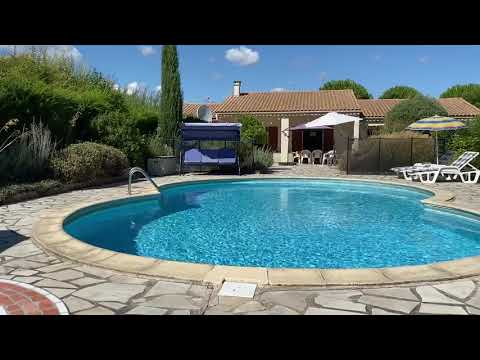